Hi everyone, it’s been a little while since the last we spoke, but my new project (the Japanese bookstore), is taking my whole time, and I still need to get used to it! So, I was willing to write a brief post about the Japanese New Year celebration, and how I actually celebrated it when I was there a few years ago BUT the end of 2017 came and the 2018 arrived and I couldn’t find the time to write… so here I am today, with the excuse that well, we can also consider the Chinese year and in this case I am perfectly on time!

So, as you would expect Japanese New Year celebrations involve a complete different set of rituals, costumes and traditions that we don’t have in Europe (or US). The first thing that I remember, and that I think is a striking difference between Japan and the Western country is the perception of New Year celebration: in Japan it is a quiet moment, almost a family and private time. So, used to the fireworks and the noisy celebration of Italy, it was quite a striking change! What for us is a typical Christmas habit (spending time with family, go back to one’s own hometown, and so on) here it is reserved to the end of the year, and the beginning of the new one – nenmatsu nenshi (that literally means “end of the year and beginning of the year”).

Still, Japanese have specific ritual to prepare for the event and to celebrate properly this moment of passage. The various actions and gestures are very interesting, and I will only remember some of the most important and popular ones: for example, I am sure that many of you heard about kadomatsu, an ornament usually placed at the entrance of houses, shops, and other public places. They are composed of bamboo (symbol of prosperity), pine (for longevity) and plum branches (steadfastness), and they are considered to be the temporary dwellings for kami (especially the gods for good fortune) invited to bless human. Kadomatsu are kept until January 15th, and then burned.

Similarly, you may have heard about shimekazari, ornaments made of shimenawa (the white sacred rope), pine and orange (symbolizing posterity); they are hung above the doors, to invite the gods and keep out the evil.

Somewhere are still popular the hagoita, a wooden paddle to drive away bad luck, and the hamaya, the arrow that destroys evil spirits, usually sold in shrines during the first three days of the New Year.

Then of course, you should not forget food, because good luck arrives through it too: for example, keep the kagami mochi (two stacked rice cakes with an orange) on your Shinto altar, and treat yourself with toshikoshi soba (“year-crossing” soba), to symbolize the cutting off of the year’s misfortunes, while express wishes for good luck and long life.

The old and the new 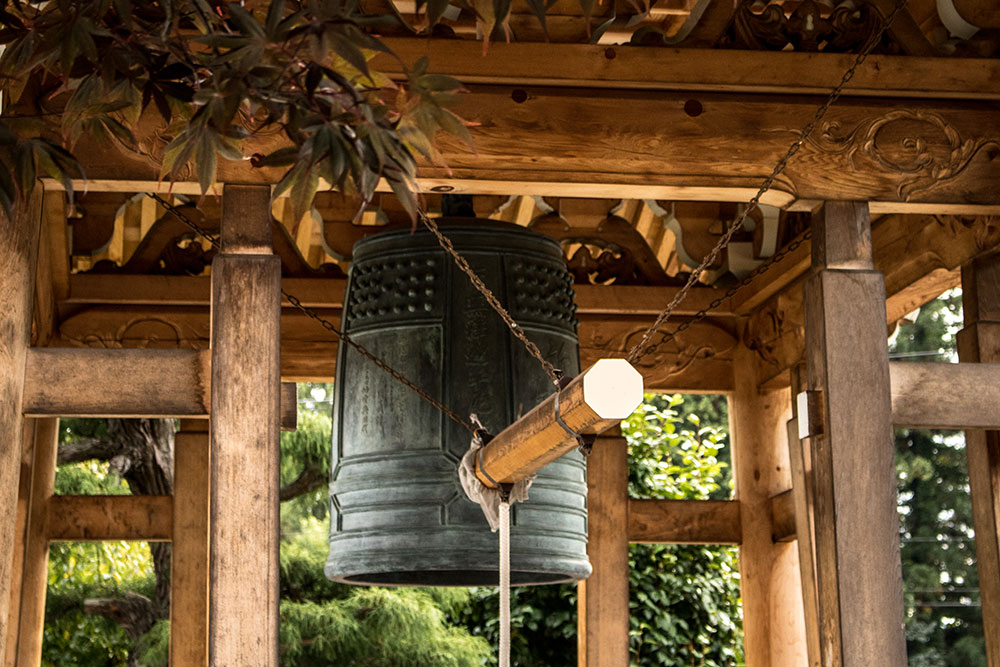 Another thing I remember from my New Year celebration is the ritual called joya no kane, when temples (such as the Sensoji in Tokyo) ring a large bell 108 times; this number, typical of Buddhist tradition, represent the number of human desires that cause suffering, therefore the ringing bell is supposed to purify minds and souls for the year to come. While you leave the old year behind your back, you can welcome the new year with the hatsuhinode, the first sunrise, and then the hatsumode, the first shrine visit of the year, usually between January 1st and 3rd. I had my hatsumode at Meiji Jingu, and the whole area was literally invaded by people!

The New Year with the Fox 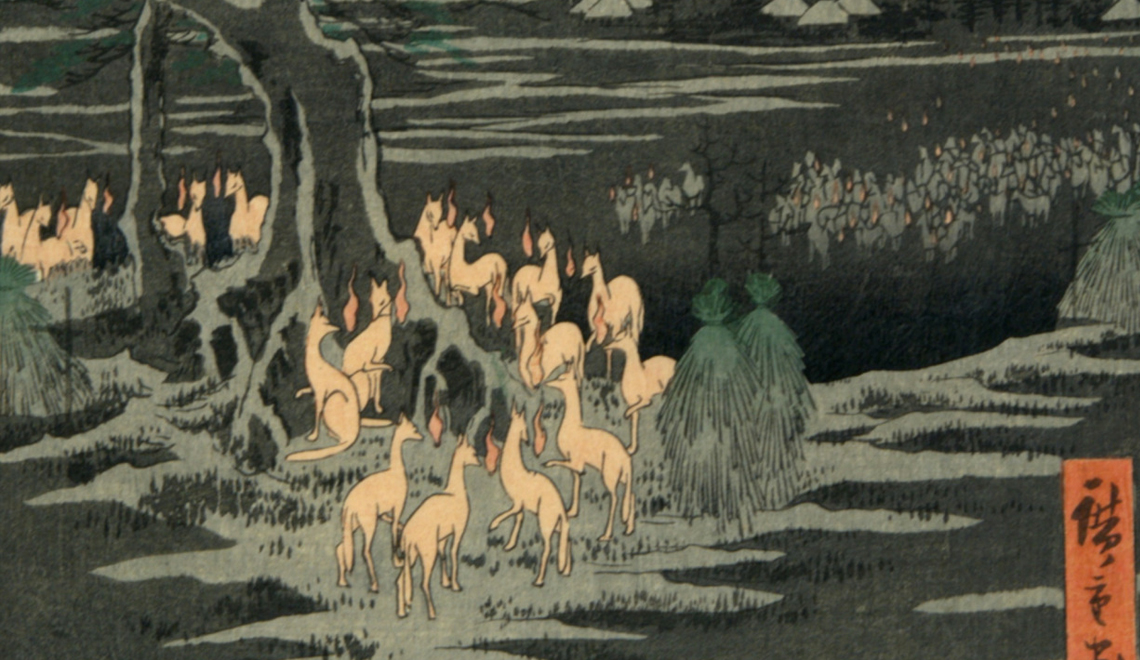 Hiroshige – The ceremonial gathering of foxes on New Year’s Eve at the nettle tree near the Inari Shrine at Oji (Oji shozoku enoki omisoka no kitsunebi). Detail.

Japan has of course an enormous amount of legends and local traditions, involving from time to time human, gods and spirits, and I can’t not remember here a popular legend about Foxes and the New Year celebration. According to the tradition (a tradition dating back to the beginning of Edo period), on New Year’s Eve all the foxes from the Kanto region would gathered under a large nettle tree, disguised as humans, and visited Oji Inari Jinja, the regional head of Shinto shrines dedicated to the deity of foxes.

One of the most famous depiction of the parade is that by Utagawa Hiroshige, and subsequently the painting inspired the first Oji Fox Parade of 1993. Since that first parade, the event is held annually, with the participants holding lanterns (sign of life and hope), while praying for growth and happiness of the children, and finally reaching the Oji Inari Jinja, where all participants celebrate the arrival of the New Year.

For the love of Fukubukuro 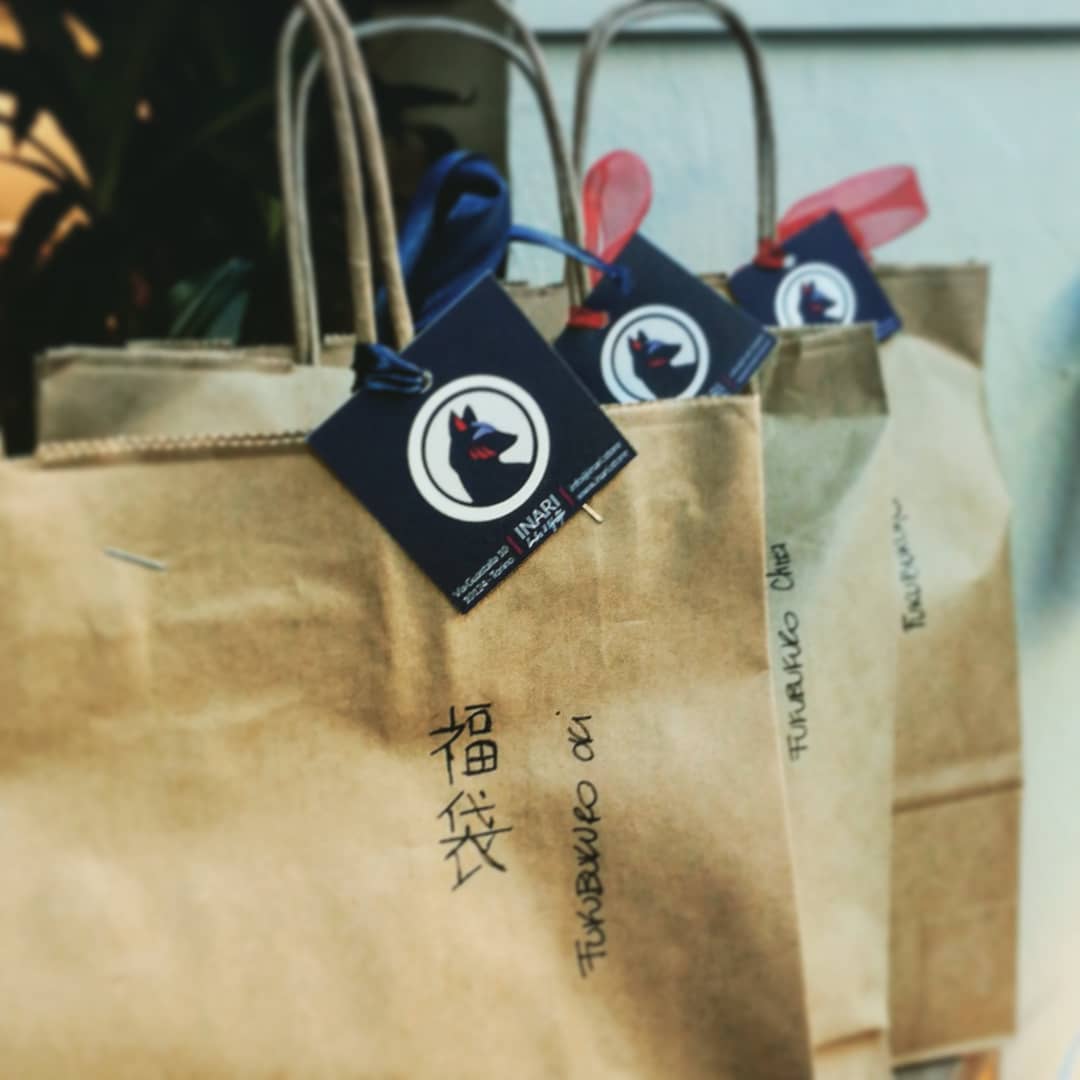 Fukubukuro at my bookstore, and on www.inaritorino.it/fukubukuro

Finally, a more prophane tradition that is now very popular in Japan; I am talking about the Fukubukuro, the “lucky bag,” that shops and retailers fill with random items from their collections, and are usually sold for less than the total value of the items. The bag is closed, and the contents are secret; this is a way to celebrate New Year and hope for good luck.