If we talk about Japanese traditions, itako are symbols of the popular, folk-religion; they have loose ties with institutional centers and established sects or schools. However, among the older generation there were some mythological references that linked the itako practices to the Buddhist pantheon, and to Shakyamuni himself. Again, this might end up being a little technical, but it represent a very interesting example of how religious practitioners hold some very significant creative power, so it might worth the reading!

The reference I want to mention here is that reported by Peter Knecht after a fieldwork in North Miyagi, in 1982, and again in 1983; Knecht participated in a kuchiyose ritual most likely devoted to the newly dead, since he described it as an extended ceremony that lasted several hours, in which a single spirit was made to speak to any member of the living family. Knecht focused his attention on the description and recount that the itako offered about the use of two yorishiro (here simple stick) in willow and peach wood, employed to call the spirits; to this specific element, he linked the following narration that integrates the employment of that particular woods, the introduction of the bow in the practice, and most important the connection of the itako trade with Buddha himself.

Mokuren, Buddha and the world of the dead 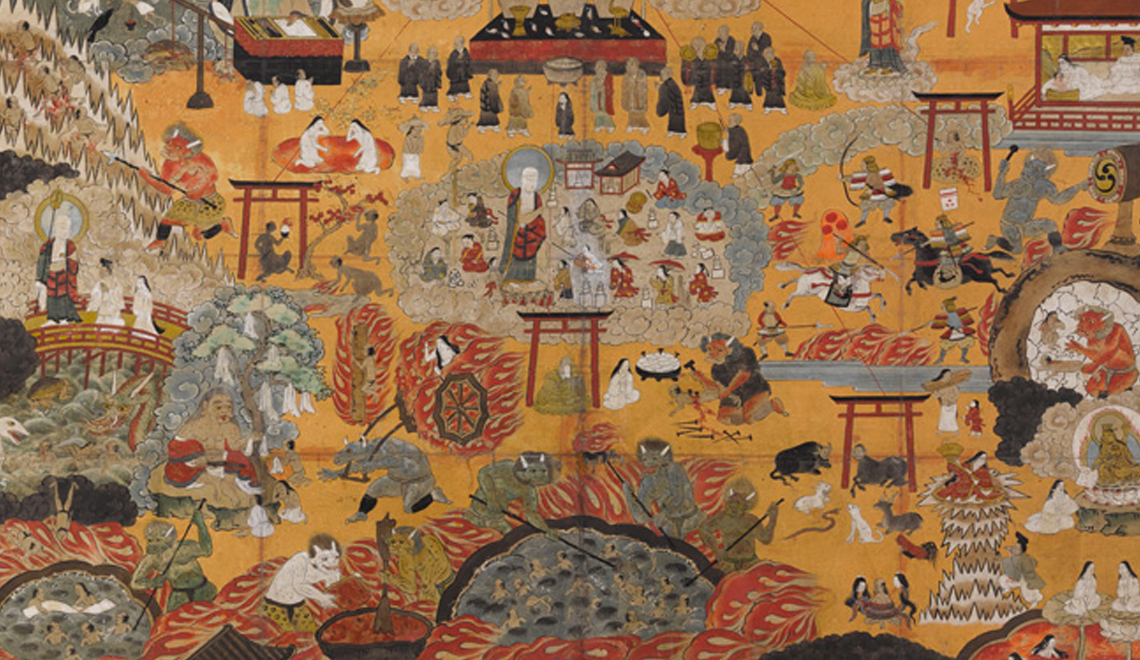 The itako narration recounts the story of one of Buddha disciple, Mokuren???, whose mother died when he was only a child, leaving him with a strong desire to meet her. When Mokuren was about twenty years old, his mother began to appear repeatedly in his dreams, telling him that she was suffering great pains in Hell; Mokuren that turned to Buddha for advice and the latter suggested to call the spirit of the mother in order to meet her. Then, he indicates Mokuren a series of tools and object to retrieve in order to perfom the ritual calling properly, toward the end of the rain season when the monks are in their hundred-day seclusion; in particular, the disciple must gather peach wood (from the north-eastern regions) to use it as a bow, a branch of willow (from the western regions) to use it as a stick, and a thread of hemp (from the southern regions). These tools combine together allow the creation of a proper bow, whose hemp thread is struck with the willow stick.

With the striking of the hemp cord, Mokuren’s mother appears in front of him, and complains about the infernal suffering in the Gakidō (the Hell of the Hungry Ghosts), where the spirits are so hungry that they can not climb to higher hells; therefore, she prays Mokuren to help her reaching some superior level, since complete salvation is impossible for these spirit.

For more details about Japanese Hells, I suggest you take a look at this article by Tofogu

Food offering and the Urban celebration

Mokuren decides to prepare some food offerings for the mother, but the burn and turn into ashes; Buddha then suggests him to prepare offering also for the other spirits of the hell, so that all of them could gain the strength to reach higher levels. When Mokuren proceeds with the offerings to all the spirits, Buddha himself is so touched as to take Mokuren’s mother directly to heaven. The basis for this narration is the Urabonkyō, the sutra considered the origin of the bon celebration, introduce through Japan from India through China.

Derived from the sanscrit ullambana, the term seems to indicates the idea of be in suspension, thus indicating the extreme suffering of the purgatory (or hell); here again we see the deeds of Mokuren who, traveling through the hells, spots his mother in one of the infernal dimensions, suffering in the Gakidō. He tries to offer her some food, but this immediately turned to ashes; therefore, Mokuren turns to Buddha for advice, and the master suggests him to make some offerings for the monks while they are in seclusion for a hundred days at the end of the rain season, so that in return they would chants and pray for the relative of the donor. 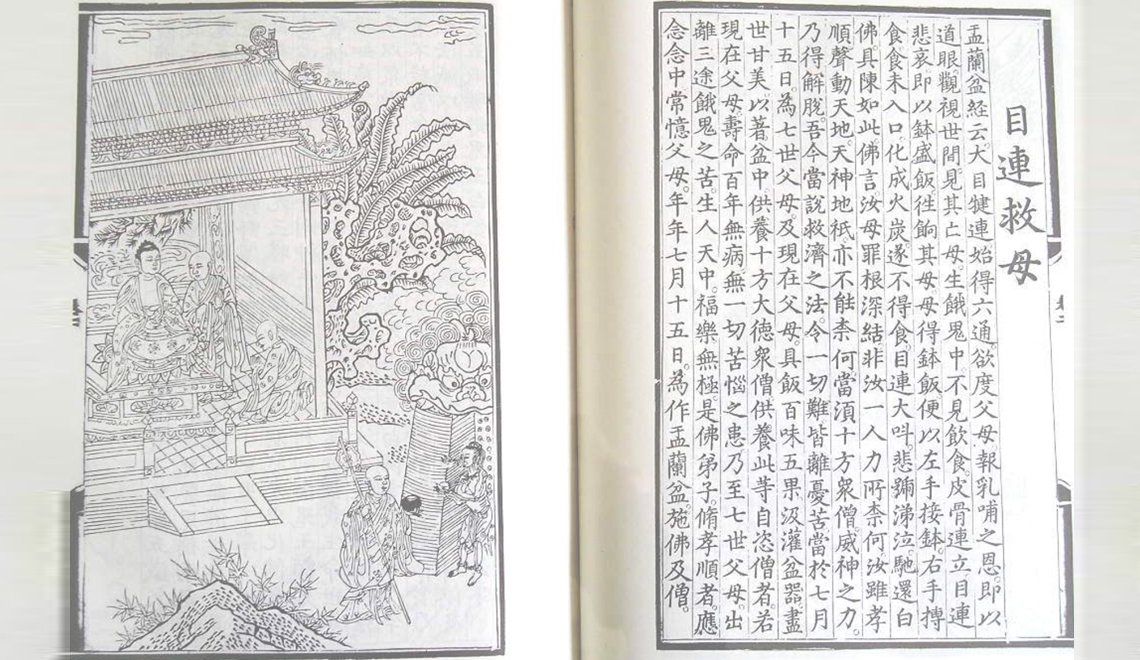 Mokuren and Buddha – see the original here at Wikiwand

While the thorough analysis of the Urabonkyō would require a wider space (leading us off track), I would like here to suggest a brief comparison between the two version of the story; clearly the itako elaborated their version from an already established, and well-known narration, and most important introduced some slight variations in order to create a better fitting for their activity. First of all, we see that while there si a similar temporal frame (the reference to the rain season and the seclusion of the monk) for the itako this is significant exclusively because it is the same frame for performing a shinikuchi (the kuchiyose for the newly dead); however, there is no reference to offerings for the monks.

Moreover, Mokuren’s success is not linked to the prayers and action of the monks, but is the result of direct offering to the hungry spirits, (reinforce by the notion that salvation has to be reached without egoism, since the food is not only for his mother, but for all the suffering beings with her); the action takes place directly between Mokuren and the spirits without any mediation by the monks. We should also notice that, while Mokuren is endorsed with special gifts in both versions of the narration (he can see his mother in dreams, and he can travel to hell), in the itako version the contact with the spirit is not casual, but it is the mother itself that announces her suffering through dreaming, thus suggesting the widespread notion that unsatisfied or suffering spirit will try to get in contact with their living relatives in order to obtain peace. In Mokuren’s case, the contact is strengthened by the action of voluntarily calling the spirit and ask him directly the reasons for its anguish (element missing in the Urabonkyō): needless to say, this is in fact the exact role of the itako during the kuchiyose, and thus Mokuren becomes the first representative of the itako practice.

The element is reinforced by the fact that it is Buddha himself that teaches Mokuren how to build the proper tools to perform this ritual; only following his advices Mokuren can indeed retrieve the woods and the thread that will allow him to create the bow to call the spirit of her mother. While in the narration collected by Knecht there is no clarity about the effective location of the various pieces of the bow (he reported that the precise directions varied in the two recounts), it seems however important to underline that beside the function of suggesting a journey before the proper ritual, they also seem to introduce a cosmic dimension in the kuchiyose itself, with which the ritual seem to include all the various level of the world.

At the same time, while there is no clear explanation of the reason for the specific choises of the wood, in popular beliefs both willow and peaches are trees associated to the world of the dead; peaches have an apotropaic power to ward off evil the threaten this world, while willows, especially in the vicinity of bridges, are considered the markers for the other world. At date, it is hard to ascertain how much this narration is still part of the itako heritage, but it is significant that until the end of the XX century we could find this kind of appropriation which aim to strengthen and ennoble the itako practice, linking it directly to Buddha and his favorite pupil.

END_OF_DOCUMENT_TOKEN_TO_BE_REPLACED

Japanese folklore facts: The Osorezan and the spirits of the dead

Talking about Japanese folklore facts, I can't but share with you my experience at the Mt. Osore, and the tradition connected to the spirits of the dead. If you remember when we talked about...

END_OF_DOCUMENT_TOKEN_TO_BE_REPLACED

Back to Japanese religions and popular traditions, with my second meeting with this young shaman. I could met Matsuda san a second time in the summer 2014, the 31st July after the Osorezan Taisai;...

END_OF_DOCUMENT_TOKEN_TO_BE_REPLACED

Screening at the MAO

So so proud to announce that we are going to screen our documentary at the MAO - Museo d'Arte Orientale, in Turin. The screening will take place thursday 23 February 2017, at 6 pm, inside one...

END_OF_DOCUMENT_TOKEN_TO_BE_REPLACED

Back to Japanese traditions and religions fact! After the first meeting with Nakamura-san, I knew I had to meet more itako in order to have a better understanding of their activity, their life and...

END_OF_DOCUMENT_TOKEN_TO_BE_REPLACED

The arrival in Mutsu after a week in Tokyo can only be described as a shock. Visual, first of all. The trip entails three train changes, that give the feeling of slowly leaving modernity...

END_OF_DOCUMENT_TOKEN_TO_BE_REPLACED

Behind the scenes: documentary 2014

In 2014, we came back to Japan in order to shoot some more for the documentary. We've been greeted by the amazing Osaka, a city that I couldn't properly visit but that gave me...

END_OF_DOCUMENT_TOKEN_TO_BE_REPLACED

The last shaman: a documentary

When we began this adventure in the Summer 2012, we set forth a little unprepared, without actually knowing what we would have found, or what to look for. We only have one certainty: we would...